Where are you? Home » News » Chokes test appliance switches to international standards 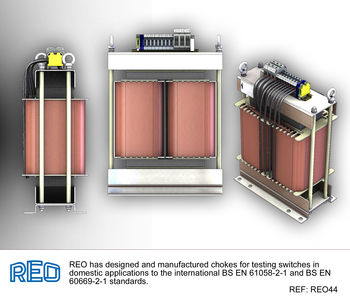 REO has designed and manufactured chokes for testing switches in domestic applications to the international BS EN 61058-2-1 and BS EN 60669-2-1 standards. BS EN 61058-2-1 applies to switches for appliances with particular requirements for cord switches, while BS EN 60669-2-1 covers switches for household and similar fixed electrical installations with particular requirements of electronic switches.

The tests for the chokes themselves demanded that nine different rated switches should be tested at the required power factor. Other manufacturers of chokes tend to do this using separate air-cored chokes and several external resistors. However, there are two key problems with this process. The first is that multiple separate chokes must be used in this scheme, which means that the space required and capital outlay is high. The second is that external resistors tend to run at surface temperatures of around 300 degrees centigrade, which means that they must be ventilated and guarded.

Air-cored chokes do not saturate but to achieve the levels of inductance required, in this instance to a maximum of 450mH, they would have to be physically very large. Furthermore, air-cored chokes have very high stray fields which can cause health and safety problems.

“When a client contacted us to provide some chokes for load testing of appliance switches to BS EN 61058-2-1 and BS EN 60669-2-1 the requirement seemed relatively straightforward,” recollects Steve Hughes, director of REO UK.

“The units should not saturate at anything less than twice the nominal current and the inductance should also remain linear to this point. The standard states that the ‘Switches shall have adequate making and breaking capacity’ and, in order to satisfy this requirement, the switches are usually tested at 1kV AC with a number of operations per minute according to their nominal current rating. This is typically 30 operations per minute if the rated current does not exceed 10A.”

Power factor is the ratio between real and reactive power flowing in a circuit and is an important consideration when rating switches. Loads like fluorescent tube lighting and transformers for powering low voltage lighting have power factors of much less than the ideal of unity and so the switches used in these applications must be capable of safely switching the current. In test applications it is usual for linear inductance and resistance to be used to derive the required load at the correct power factor.

“REO chose to realise the whole requirement using one iron-cored choke, with multiple taps and high DC resistance,” continues Steve Hughes. “The core was of significant size to ensure that linearity and saturation requirements were easily met. The test can be easily automated as it is just a question of changing taps and external resistors are no longer needed due to the high winding resistance. The chokes run cool to the touch and with minimal stray field emissions.”

“The customer is immensely satisfied with our solution. The current requirement in this case was relatively small, but the need for a flexible and economical solution was of the utmost importance. REO demonstrated its competence in the field of wound component design but also its knowledge of test engineering and knowing what works best in test laboratories.”