Where are you? Home » News » Increasing the lifespan of your motor

Increasing the lifespan of your motor 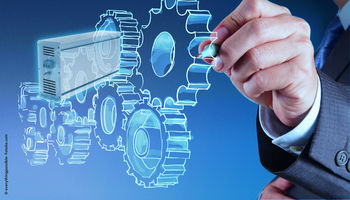 In mission critical industries such as pharmaceuticals or paper and pulp, a motor malfunction can translate to millions in lost profit. Looking after the bearings in your motor by improving power quality increases its lifespan and reduces maintenance related downtime, explains Steve Hughes of REO UK.

Many modern motors, in variable speed applications, are fitted with a Variable Speed Drives (VSD) which use a frequency inverters with semiconductor devices. The switching techniques used generate high rates of change of voltage, which can have undesirable effects on the motor.

Both long cable runs between the frequency inverter and the motor and fast switching times can contribute to the premature failure of a motor as the result of bearing damage or insulation failure. Other unacceptable phenomena such as power losses, high acoustic noise levels and parasitic earth currents can also occur.

The great majority of motors in industry contain bearings, which are the main supporting elements of the application. The most sophisticated bearings for specialised applications are very precise devices; their manufacture requires some of the highest standards of precision in industry. These bearings are costly to replace and their failure can result in an entire application suffering downtime.

The bearings constrain relative motion and reduce friction between moving parts in the motor. The design of the bearing may, for example, provide for free linear movement of the moving part or for free rotation around a fixed axis; or, it may prevent a motion by controlling the vectors of normal forces that bear on the moving parts. Many bearings also facilitate the desired motion as much as possible, for instance by minimizing friction. Bearings are classified broadly according to the type of operation, the motions allowed, or to the directions of the loads applied to the parts.

Bearings in electrical motors have been known to suffer from electrical erosion. Unfortunately, this can occur relatively quickly after the application becomes live – often merely a matter of months. As a result, maintenance and condition monitoring teams need to keep a close eye on bearings performance.

Electrical erosion is very hard to spot, but it leads to bearing damage and subsequently premature bearing failure. The only way to detect electrical damage is to connect an oscilloscope and probe to the motor application.

Initially, erosion manifests in the form of tiny craters; a process called fluting. At a more severe level, electrical corrosion can cause blackened grease representing the degradation of the lubricant around the bearings.

The conventional solution is to fit a low-pass filter at the output terminals of the frequency inverter, which reduces the differential-mode interference to a smooth sinusoidal waveform with a ripple content of less than five percent.

However, this type of filter is inadequate for applications where the reliability of the motor is of upmost importance and where replacing the motor would come at a very high cost.

The solution is to use a conventional differential mode and a common-mode output filter. This helps eliminate bearing damage, such as localised corrosion, caused by heat and pitting  as a result of pulsing currents.

Other benefits of using this combined solution include noise reduction, diminished current losses, reduction of radiated interference from cables, and prevention of hazardous voltages and leakage currents.

Sinus Filter Plus ++ in practice

REO UK has applied the above solution to protect the bearings of an underground pump motor which is used in a combined geothermal and solar panel heating system.

The problem here is that the cable running from the frequency inverter to the pump is very long and the water column provides a low impedance path back to ground. The resultant current pulsing through the motor bearings can create serious damage to the motor. Unfortunately, replacing or repairing the pump is a very costly project.

A REO Sinus Filter Plus ++ has been connected to the output terminals of the frequency inverter to reduce the common-mode disturbances that would otherwise cause premature bearing failure.

The high-frequency interference causes the metering equipment to give inaccurate measurements - a problem also corrected by fitting the REO Sinus Filter Plus ++.
In applications where several motors are connected in parallel to a single frequency drive, the Sinus Filter Plus ++ can also help.

Electrical erosion is the main cause of premature bearing failures. Preventive maintenance can alleviate the risk of machine downtime and the costs associated with it. REO's Sinus Filter Plus ++ can preserve the health of bearings and prolong the life of your electrical motor.