Where are you? Home » News » More robots, more problems 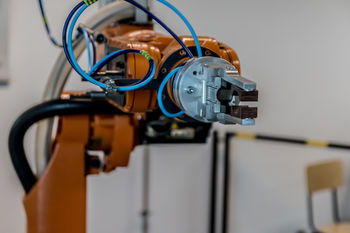 Relax; count backwards from ten, the robot will see you now; these are hardly the reassuring words you need to hear while in the operating theatre. The surge in surgical robots is coming, but with more robots comes more problems. Harmonics and electromagnetic interference are just two factors that are detrimental to safe working environments when operating that need to be eradicated. Here, Steve Hughes explains the need for a robust infrastructure when using these devices.

Surgical robots still sound like fantasy to some but in fact they are already a reality, with 70 currently operating throughout the UK and the NHS having taken out a £300M contract to build on the portfolio of robo-staff. Up until now, the Da Vinci was the number one surgical robot in the game but now there is a new robot in town; the Versius robot. Precision, accuracy and portability are all benefits we can attribute to the new robot, but these benefits pose dangerous risks when it comes to power reliability.

Protecting the power supply of surgical robots is critical. Performing keyhole surgeries with a view to provide faster recovery and minimal pain for patients, it is imperative that surgery runs smoothly, without the worry of electromagnetic interference (EMI) or power fluctuations.

The difficulty with this is the ever-growing amount of switch mode power supplies (SMPSs) being used in hospitals and such environments. With the constant stream of devices and power demands, the risk of EMI is growing, and it is a risk that medical professionals cannot afford to take.

A key selling point of the new robots is portability, meaning they can travel between sites and hospitals. With fixed surgical robots, the theatre itself can be isolated from the rest of the electrical network, eliminating problems introduced into networks via SMPSs. But with portable surgical robots, it becomes more complicated as the robot itself needs reliable isolation from networks.

Fortunately, there is a solution to this conundrum in the form of isolating medical transformers, such as those from REO UK. The REOMED range offers the reassurance of power isolation in more mobile applications.

The medical transformers can be designed into equipment to provide inbuilt isolation from networks suffering from power quality problems. With the increasing trend and demand for surgical robots, patients will want to know they are in safe hands, or arms as it were. Using medical transformers will make for a smoother transition to these types of procedures, offering safety and reliability inside and outside the traditional operating theatre.

Not only do the medical transformers protect against power surges, EMI and overload but they conform to the latest EN IEC 60601-1 fourth edition international standards too.

So, while we won’t be abandoning human surgeons just yet, the future is shaping up to be an autonomous one. With more robots performing increasingly difficult tasks, it’s crucial that the correct infrastructure is in place.

To find out more about the range, get in touch with an expert by calling +44 (0) 158 673 411. For more information on how modern medical technology is changing power requirements, download REO’s state of medtech whitepaper here.