Where are you? Home » News » REO in the birthplace of industry

REO in the birthplace of industry 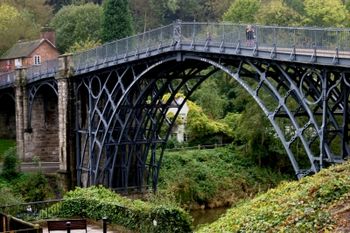 A few weeks ago, REO’s Steve Hughes and Tim Cook attended a business networking event at the Engenuity Centre in Ironbridge. Organised by the Corrosion Prevention Association (CPA) and BAC Corrosion Control, the aim of the event was to promote a debate on cathodic protection and corrosion prevention methods. REO088 - Ironbridge

The networking session took place at the Enginuity Centre, one of the ten Ironbridge Gorge Museums. Located against the picturesque backdrop of the river Severn, the cluster of ten museums is home to early Victorian furnaces, factories, workshops, canals and the settlements of Coalbrookdale, Ironbridge, Jackfield and Coalport settlements. Ironbridge is still fondly referred to the birthplace of industry!

With such an inspiring setting, the event organisers wanted to create an opportunity for people in the power industry to network with suppliers, customers and key decision makers. The event commenced with a presentation from BAC, and it was followed by a tabletop exhibit for the cathodic protection market.

BAC Corrosion Control, based in Telford, boasts over 60 years of experience in cathodic protection, corrosion control and pin brazing. The company specialises in projects in the oil, gas and utilities pipeline sectors, steel and concrete, buried structures and other industrial plant protection applications. REO works closely with BAC, offering switch power supplies of up to 6- kW and communication systems used to interrogate remote monitoring.

Cathodic Protection (CP) is a technique used to control the corrosion of a metal surface by making it the cathode of an electrochemical cell. Cathodic protection systems shield metallic structures in various harsh environments by applying an inverse DC voltage that stops the current flow and hence reduces metal destruction.

Some of the common applications for cathodic protection include steel water pipes or fuel pipelines, storage tanks (such as home water heaters), steel pier pylons, ship and boat hulls, offshore oil platforms and onshore oil well casings. Another common application is in galvanized steel, in which a sacrificial coating of zinc on steel parts protects the pipes from rust. Cathodic protection can also, in some cases, prevent stress corrosion cracking.

Steve and Tim were attending the event to promote the REOTRON SMP, a switch-mode power supply that guarantees a safe and stable electric power supply in process engineering plants. It can be successfully used for cathodic protection as it is has galvanic separation from the input to the output. Furthermore, it can be used for regulating voltage, current or power.

The REOTRON SMP, as well as our long history of innovation, represents proof that REO has been at the forefront of power quality for decades. And who knows, perhaps in a century from now its innovative products will find their way in industry museums such as Ironbridge’s Gorge Technology Centre!