Where are you? Home » News » REO test systems for motors and frequency drives 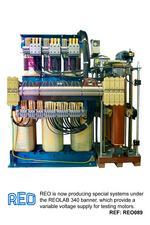 REO is now producing special systems under the REOLAB 340 banner, which provide a variable voltage supply for testing motors.

Inverters produce harmonic rich currents on the mains supply side, which increases the I2R losses in the supply transformers and causes additional heating. Furthermore, the high frequency current components also cause heating because the inductive reactance is frequency dependant. The problem is made greater by the “skin” effect” forcing the current to flow in the outer surface of the conductors.

The harmonic currents produce voltage distortion caused by supply impedance, which is primarily reactive in content. Consequently, to test inverters, it is necessary to have a considerably over-rated supply transformer or to have one with a low impedance, so that lower harmonic voltages are created.

The REOLAB 340 range can be used as a stand alone unit for a number of tests such as voltage sags (Dips), swells and variations, under and over voltages, phase unbalance and function tests on world-wide supply voltages.

In conjunction with other test gear, the REOLAB 340 can also be used for testing load characteristics, temperature losses in the motor stator and armature, lamination efficiency, torque and power measurements and response times.

The REOLAB 340 system comprises of a fixed transformer with multi-tappings which, to reduce losses, allows the variable transformer to always be used at the top end of its range. A booster transformer and variable autotransformer combination is used for economy and this provides a regulated voltage output.

The fixed transformer has a specially constructed core and separate primary and secondary windings, which provide low impedance, combined with harmonic attenuation and a small voltage drop. This gives the advantage of a much lower inrush on start-up and significantly reduces the voltage harmonic distortion, which therefore generates a good sine wave for testing the inverter. It is also not necessary to have a greatly over rated test supply with the capacity to handle the harmonics.

Options for the control system include separate control of the three-phase (necessary for phase unbalance tests), an NLR 500 REODATA interface for computers, PLC’s or field bus and a POWER FORMER built-in touch panel screen for setting up the system and displaying measurements.