Where are you? Home » News » The journey of railway electrification

The journey of railway electrification 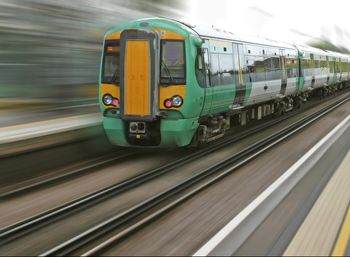 If you were to step onto High Speed 2 (HS2) in the northern reaches of the UK for a trip to London, you would witness a significant change of landscape in a relatively short amount of time. The same can be said for the journey of railway electrification, which in 133 years has gone from a quarter mile of track to the majority of the UK.  Here Steve Hughes, managing director of power quality specialist, REO UK, looks at the electrification of rail.

In 1883, pioneering electrical engineer Magnus Volk developed the UK’s first electric railway. Running at only a quarter mile, Volk’s Electric Railway in Brighton left much to be desired but laid the groundwork for what has since become a multimillion-pound industry.

In fact, the majority of the UK rail network is now electrified. According to a 2010 Network Rail report on electrical losses, approximately 60 percent of all rail journeys are powered electrically. This totals an impressive 6,043 miles, with this figure climbing as plans for HS2 and Great Western Railway begin rolling out over the next few years.

However, how did we get to this 24,000 percent increase? While it did not take long for interest in Volk’s Line to drive a half-mile extension, it wasn’t until the early 1900’s that main-line electrification was experimented with in some suburban areas.  It was even longer before any strict regulations governing power quality came into effect, with The Railways Act 1993.

This outlined the privatisation of railways but also put tighter regulation on power quality and the voltage stability of railways. With a reduction in the number of power line failures as a result of improved electrical infrastructure, the railway industry was presented with an opportunity to steam ahead with expansion.

Much of this expansion consisted of converting dangerous third rail systems to safer overhead lines. With the use of consistently reliable insulators, transformers and support structures, as well as capacity to transmit up to 25 kV of AC electricity, it is no wonder that overhead lines are the most common form of railway power supply.

Powering the future of rail

In 2015, a new challenge to railway power quality presented itself. UK railway companies began testing the European Rail Traffic Management System (ERTMS), a computer-controlled signalling system that will replace railway signals with digital displays in train cabs. In effect, the ERTMS will function similarly to a smart autopilot feature.

However, this poses the risk of electrical interference. Electronic devices, particularly those that transmit data, can become prone to generating this interference when they are in use and connected to a power source. The ERTMS, while fixed within the train cab, will feed data through the system in order to keep track of other trains operating on the railway.

This means that the ERTMS, while designed to “reduce the costs of maintaining the railway,” will in fact pose an electrical challenge that will require specialist infrastructure changes to safely filter.

Yet this is just the current stop on the journey of rail electrification. For the time being, the last destination remains the scheduled launch of HS2 in 2033. Prior to this, there will be the large-scale electrification of railways such as the Great Western main line, highlighting an ever-growing demand for sufficient electrical infrastructure, such as power line filters and current transformers, that can ease the transition to these new systems.

With almost two decades of expansion planned, it is essential that rail companies invest in the technology to facilitate this next phase of growth and, in doing so, give passengers the very real feeling of stepping out into a different world.